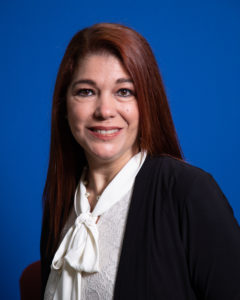 The City Clerk is one of the two charter official positions that are appointed by the City Commission.

Carmen J. Garcia was appointed City Clerk on July 19, 2016, and serves as Director of Administrative Services, Secretary to the City Commission, Official keeper of the City Seal, Records Custodian and Supervisor of Elections for the City of Sweetwater.

Mrs. Garcia was hired by the city on June 13, 1998, as Maintenance Department Secretary, later in October 2002 went to assist in the Mayor’s Office as Mayor’s Secretary and was appointed Deputy City Clerk from February 2004 through July 2016. In this capacity, she has supervised the City’s Passport Acceptance Facility which has been nationally recognized by the U.S. Department of State as one of its best.

The City Clerk’s Office strives to ensure effective functioning and present a courteous and professional service being priority number one to serve with excellent customer service to residents, business owners and the public.

The Office of the City Clerk provides assistance with the following responsibilities: