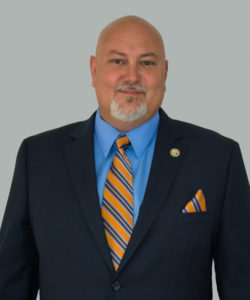 A natural entrepreneur, Orlando Lopez, grew up around his family business. Working at the family business from a young age, Lopez gained a keen understanding of budgets and finances. He went on to run several successful businesses, including the most recent real estate investments. In 1999, Lopez moved to Sweetwater and, shortly after, became involved in the community. His passion for public service led him to run for city commissioner in 2001. After serving 14 years, he was elected Mayor of Sweetwater on May 12, 2015.

Under the City's strong Mayor form of government, Lopez serves as the City Manager, overseeing all of the City's Departments and Finances. As a successful businessman, investor, and former member of the Sweetwater City Commission, Lopez brings a wealth of business and institutional knowledge. As a forward-thinking, modern-day Mayor, Lopez is dedicated to aligning all city efforts to the University City vision and to modernize the deployment of municipal services.

In addition, Mayor Lopez's vision for modernization includes expanding the City's transportation services, with additional circulators and trolleys. Through a partnership with the Transportation Management Authority, students and residents will have access to a software application through which they can access the estimated arrival time, further facilitating their capacity to commute within the City and to the University.

Mayor Lopez has also encouraged and helped foster the development of a 63-acre parcel of land slated to break ground for construction in approximately three years, between 12th and 14th street along 107th -111th avenues. The project, in its entirety, is slated to bring four hotels, office space, entertainment areas, and 40,000 square feet of commercial area to the City of Sweetwater.

Mayor Lopez has also focused the efforts of his administration on transparency, accountability, and shedding light on the City's historically flawed budgetary practices. As part of his dedication to transparency, he has reached out to State and Federal Agencies to ensure best practices are standard throughout all city departments.

Mayor Lopez was born in Miami Beach, Florida. He is the son of Cuban immigrants. He grew up mostly in Westchester and graduated from Belen Jesuit Preparatory School. He later attended Miami-Dade Community College. He enjoys spending time in the Florida Keys surrounded by family and friends. He has been a resident of Sweetwater for over 21 years and continues to live at the same address with his wife Belkys, step-daughter Abby and his dog Luna.